Justice McKeig  was Saturday’s commencement speaker in Red Lake.  She talked about her experience as the first Native American to become a member of the state’s highest court.  Her advice to graduates was to “celebrate this moment, remember this moment,” and “to dream big.”  “When you dream big, you are representing all of us.”. [READ MORE] 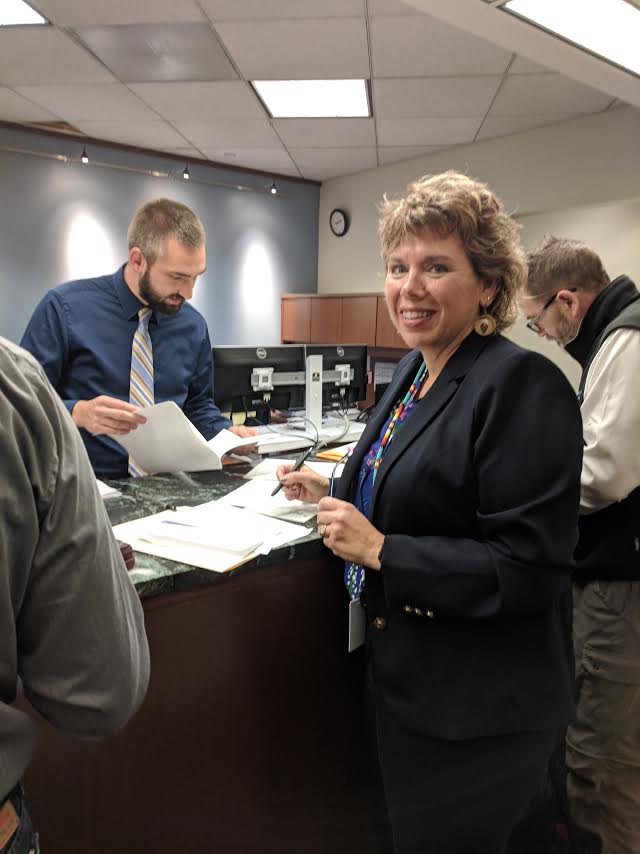 Justice Anne McKeig filed for election today with the Minnesota Secretary of State. 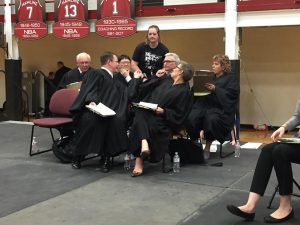 Real Minnesota jurists served as the deciders in the final trial round of the American Mock Trial Association’s 34th National Championship Tournament hosted at Hamline University in St. Paul, MN, April 20-22. On a split decision, the all-Minnesota jury declared the team from Miami University of Ohio the winner over Yale University.. [READ MORE] 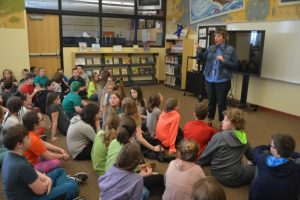 Justice McKeig visited students at the Raven Stream Elementary School in New Prague. She answered questions about how she prepared for college, what types of cases she worked on as a lawyer, and what it’s like to be the youngest member of the Minnesota Supreme Court. [READ MORE] 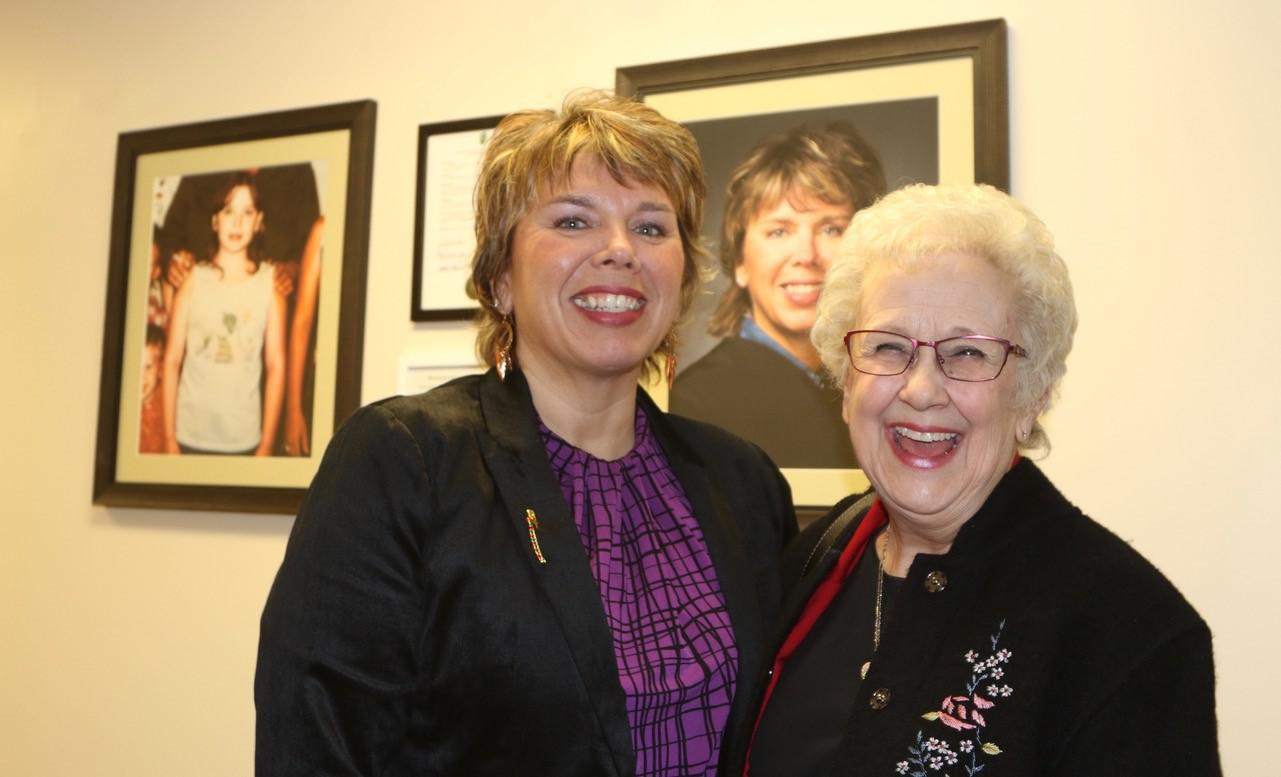 Justice Anne McKeig recently spent a couple of days visiting the courts in Bemidji and Walker as part of the Minnesota Supreme Court judicial “ride along” program. Justice McKeig grew up on the Leech Lake Reservation in the Sugar Point and Federal Dam areas. She graduated from Northland High School in Remer before attending the College of St. Catherine and the Hamline School of Law. [READ MORE] 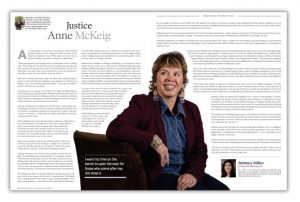 Justice Anne McKeig is featured in the November/December 2017 issue of Hennepin Lawyer magazine. The 2-page feature story was written by Brittney Miller, an attorney at Moss and Barnett who specializes in the practice of family law and previously clerked for Justice McKeig in Hennepin County Family Court.  [READ MORE]

Judges on the Hennepin Country District Court are reaching out to American Indians living in the county – to hear about their experiences in family court.

Family court hears cases involving child custody, divorce and domestic violence. White Earth descendent Anne McKeig (mc-keg) was a judge in the Hennepin County family court before she was appointed as a Justice on the state Supreme Court in fall of 2016. She says she is still involved in the county judicial listening sessions.

Justice Anne K. McKeig, the first American Indian to serve the State of Minnesota as a Supreme Court justice, is the recipient of Bemidji State University’s 35th Distinguished Minnesotan award.

First presented by Bemidji State in 1981, the Distinguished Minnesotan award acknowledges the contributions of current or former residents of the state who have performed exemplary service to the people of Minnesota or the United States.  [READ MORE] 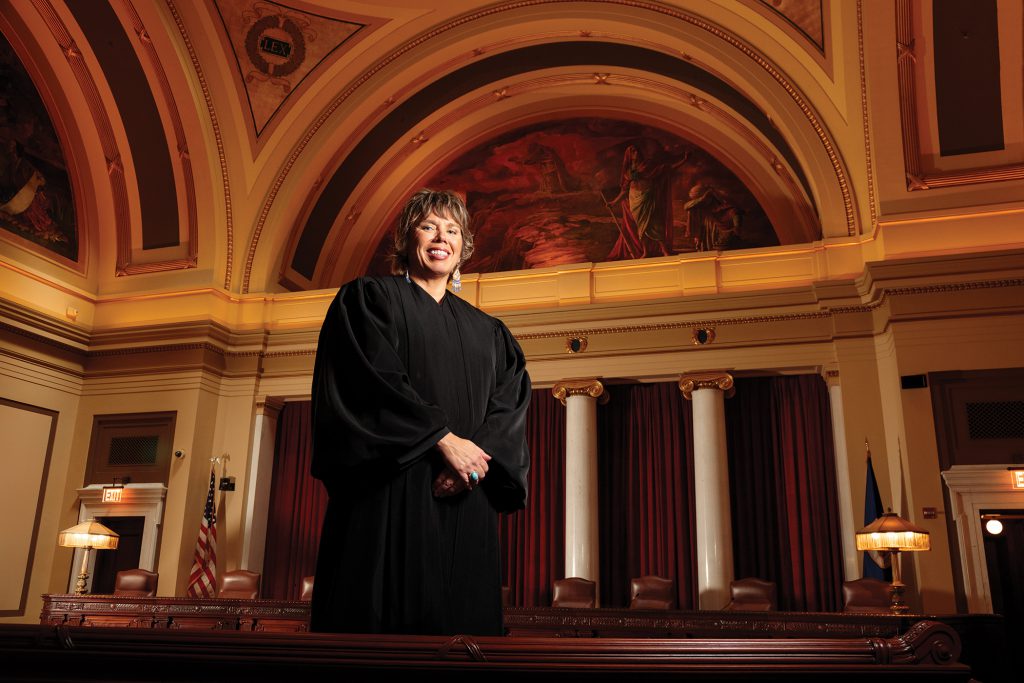 A native of tiny Federal Dam, Minn. (population 110), within the Leech Lake Indian Reservation, Anne McKeig ’92 (HUSL) took daily 30-mile bus rides to Northland Community Schools in Remer. During her freshman year there, her class had an assignment to choose careers they were interested in and then report their findings. She picked dentistry, designed an eye-catching folder with the image of a mouth on its cover, and set about compiling her research.

There was just one problem. [READ MORE]

An interview with Justice Anne McKeig of the Minnesota Supreme Court
Bench & Bar of Minnesota | February 6, 2017

Justice Anne McKeig joined the Minnesota Supreme Court as an associate justice on September 1, 2016. A descendant of the White Earth Nation, Justice McKeig is the first American Indian to sit on the state’s highest court. Her appointment also created a women’s majority on the court. Justice McKeig serves on numerous committees and boards related to many issues, including child protection, domestic violence, and Native American Indian matters. Prior to joining the Supreme Court, Justice McKeig served as a Hennepin County District Court judge, presiding in Family Court.  [READ MORE]

When the McKeig family lost it all, an entire union was there
Elevate Minnesota | February 3, 2017

Anne McKeig was born and raised up in Federal Dam by a union man who instilled the importance of hard work and respect – two values that Anne has carried through her life and continues to pass down to her children every day.

The daughter of a heavy equipment operator, she began developing her work ethic as a dishwasher at age 13, and she hasn’t stopped since. Anne went on to college, earned a law degree and worked all the way up to the Hennepin County bench. Now, she’s Minnesota’s most recently appointed Supreme Court Justice. [READ MORE]

Meet Anne McKeig, the first Native American jurist on Minnesota’s highest court. To find out more join us at www.NativeReport.org.

Hennepin County Judge Anne McKeig could not hold back her tears Tuesday morning as Gov. Mark Dayton announced her appointment to the Minnesota Supreme Court.

“Today is a historic day, not only for myself and for my family but for all Native people. It underscores the importance of one person leading so that another can follow,” McKeig said during the announcement, attended by court members, her family, mentors and colleagues.  [READ MORE]

Scroll Up
Warning: A non-numeric value encountered in /homepages/25/d652150640/htdocs/clickandbuilds/JusticeAnneMcKeig/wp-content/plugins/ultimate-social-media-icons/libs/controllers/sfsi_frontpopUp.php on line 63